Bollards - Where and how many? 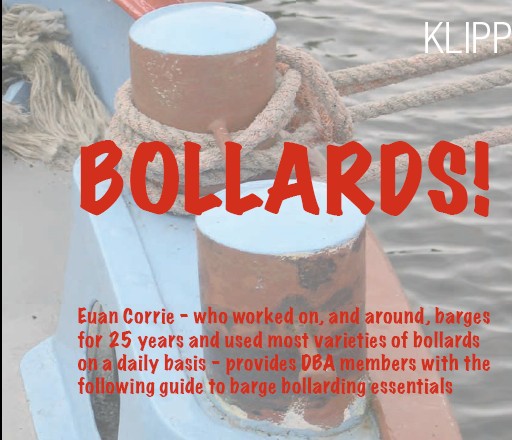 A barge might usefully have single bollards right on the pointed and blunt ends and about half way along each side deck. Essential are pairs of bollards each side of the ship about three quarters of the way to the stern – these usually turn out to be immediately outside the side doors of the wheelhouse. Also essential is a pair each side just forward of the point where the ship starts to taper from full beam to the stem. On bigger barges three bollards are often provided in a line here. The bollards should all be as close as practical to the edge of the deck or gunwale but not so close that any rope around them overhangs the ship’s side. These pairs of bollards are used in working the ship in locks and so on, not only for mooring.

All large vessels like ships and barges are worked with the eye spliced in the end of the mooring line placed over the mooring post on the land, the lockside bollard, or the tug’s towing hook, etc, so the bollards on your vessel must accommodate sufficient turns of the largest line you use to create the friction necessary to stop or hold your vessel. The bigger the diameter of the bollard the more friction you can make use of and the more space it takes up on deck! If the bollard is too small the rope tends to be damaged by being tied round it as though in a knot. The bollards aboard our 1926-built 73ft ship which displaces about 74 tons are just over 6in in diameter which is excellent for use with our 22mm polypropylene mooring lines.

The pins are about half inch diameter and best thought of as going straight through the bollards projecting about 4in each side and arranged to point fore and aft parallel with the centre line of the vessel. There is room for 3 to 4 turns of our (22mm) line round the bollards below the pins and two secure turns plus one liable to slip off the top of the bollard above the pins. The pairs of bollards are about 11ins apart. In locks or at moorings where the attachment of your line on land is above the height of the bollards on the ship a line can be taken diagonally down to the deck and half a turn round that bollard of the pair which is furthest from the line’s origin and so to the other bollard round which it is wound three times below the pin.

Keep the turns parallel to get maximum grip on the bollard and do not allow them to overlap one another or they will jam. The fourth turn is made above the pins in the form of a half hitch with the bitter end of the line caught under the turn. This securing will hold a 2,000 ton barge if the line and bollard are of the appropriate size!

Having pairs of bollards each side by the wheelhouse and at the fore deck will allow working in locks and so on as described above, checking of the vessel’s speed by applying friction around the bollard or securing of two independent mooring lines (say head rope and spring) and, in general, useful versatility. Do not allow your builder to put a continuous pin through both bollards of the pair spanning the gap between them, as some do; that will prevent you surging a line around a bollard to allow the vessel to move along the mooring a few feet or figure-of-eighting the line, should you want to, or even simply turning the line around the bollard a few times and you are forced to end up with a ravel around pins and bollards which is untidy and sooner or later jams inconveniently.

A third pin at an angle to the ones I have described is liked by some deck hands as an additional aid to preventing coils of line around a bollard lifting off inadvertently or tangling over each other but I don’t think it essential on smaller barges. Don’t forget that no matter what you may see on many pleasure craft the pins are not intended to take any weight or strain, they are there to prevent the line slipping off or tangling. You make your hitch or knot* (if you must) around the bollard itself which takes the weight of the vessel; never tie to the pins.

The single bollards sometimes seen on the extreme bow and stern of barges are useful for towing or being towed or for occasional mooring lines in awkward spots where the mooring posts or whatever don’t fit the ship. Those part way along the side deck can help when you cannot extend mooring lines outside the overall length of the ship or where a spring might be used in maneuvering in an awkward corner. All our bollards are vertical to the water line which seems fine but some traditional barges here and on the Rhine have them sloping inboard which must help to prevent lines reaching up to high moorings slipping off the top.

(edited a little for this article)

NB:  Some consider a locking turn , or “half hitch” can become impossible to release when under tension. They prefer securing a line after taking turns round the bollard with a lighterman’s, or boatman’s, hitch (as constantly used on Thames Sailing Barges). "It can’t slip, can’t jam and lifts off when you’ve finished with it."

Terry Langridge provides the following description of the Lighterman’s Hitch:

“The quickest, easiest and safest method I’ve come across of securing a line especially a heavy or long line for surging and mooring is take one or two turns around a single, preferably large bollard, then form a loop in the free end and pass this under and over the attached end and back over the bollard in the opposite direction as the initial turns. For additional surging resistance loop the free end around the bollard again in the initial direction.

For mooring, another loop passed under the line and around the bollard in the opposite direction is usually more than sufficient depending on the size of the line. As the end is always free it cannot jam and the loops just fall away to release in seconds. Only one bollard is used for mooring leaving the others free for more lines. I’ve also used this method frequently for quick release towing lines where any other hitch would tighten too much.”