Most countries' waterway regulations require Lifejackets to be carried on all boats, with evidence that they have been recently serviced.  On  boats of 20m+,  the Community Certificate (ES-TRIN) EU Directive requires a lifejacket for each person regularly onboard.

What sort do I need? 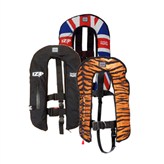 Most Lifejackets are rated at or over '150N', sufficient flotation to support an unconscious adult.  However TRIWV specifies a minimum of 100N and, for smaller boats, France simply calls for 'positive buoyancy'.

It goes without saying that an unconscious 'man-overboard' (MOB) cannot ativate a manual jacket.  In locks or when mooring there is a higher risk of hitting one's head while falling in.

Safety jackets come in many styles -  e.g. as a basic harness, a gilet / waistcoat or as a full coat.  Some examples are shown here

The difference between Buoyancy Aids and Life-jackets is well described here. Some take the view that a buoyancy aid gives a conscious MoB more mobility in the water.  ALife-jacket will support an unconscious MOB with their head out of water: a Buoyancy aid will not!

These pages
www.lifejackets.co.uk
www.rya.org.uk
describe the generally accepted practice in the UK and requirement in most countries - I.e. check each jacket yourself at least once a year and get them serviced by an expert every two years.

For boats of 20m+ this is a clear requirement (in ES-TRIN).  Smaller boats are covered by each country's national legislation standard  - but generally the same

agent. The cost can be as little as £10 per jacket

Recreational craft with a length of 2.50  to 20 metres and that the product of the length, width and draft is less than 100 cubic metres sailing in inland waters  must be equipped with a mandatory safety equipment (Decree of April 11, 2012) depending on the type of boat and sailing area.

Pleasure boats whose length exceeds 20 meters or that the product of the length, width and draft is at or above 100 meters cubic sailing in inland waters (including registered vessels at sea) must be equipped with a mandatory safety equipment (Decree of January 19, 2009) depending on the type of boat and sailing area.

Some examples of the EU and national regulations.

- A personalised, automatically inflatable lifejacket in accordance with European standards EN 395: 1998 or EN 396: 1998 shall be within reach of every person who is regularly on board a craft.

- Non-inflatable lifejackets in accordance with these standards shall also be admissible for children.

- Lifejackets shall be inspected in accordance with the manufacturer's instructions.